During the old times, we barely had two choices between cars — normal cars and luxury cars! You could be going for a normal passenger car that’s standard or spending a lot of money for a luxury vehicle. Though in the course of time, people needed something in-between both these choices, and Small Luxury Cars were a suitable answer. These cars are also known as entry-level luxury cars since they offer something better than a Honda Civic or Toyota Corolla. In the past year, 2017, entry-level luxury cars had an increasing demand — and the inter-brand competition was high. Today, in this article, we will have a look at the best small luxury cars of 2017. 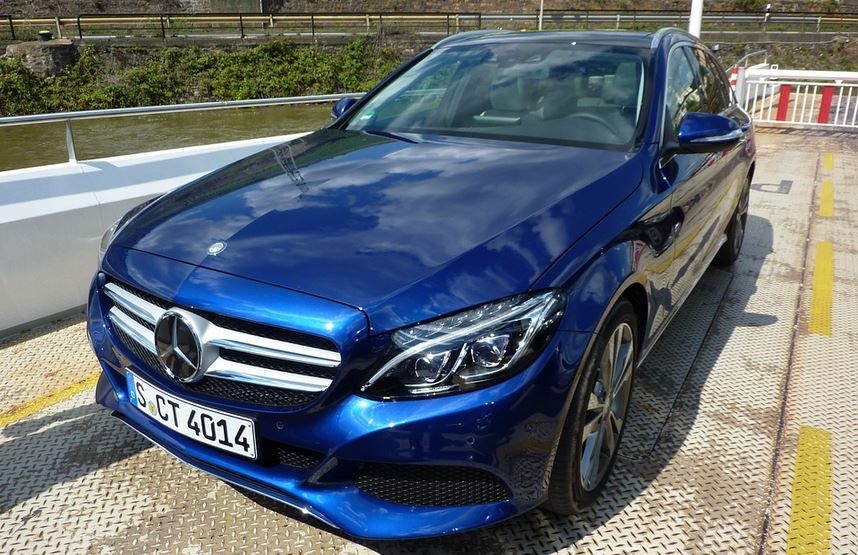 C-Class from Mercedes-Benz was one of the best-seller entry-level luxury cars of 2017. It was able to make a sale of 77,447 units, which also happens to have a growth of 0.40% when compared to last year. Although the Mercedes-Benz C-Class ensures the entry-level luxury that you can expect from the brand value, you can have an amazingly comfortable drive. In addition, you have the option to choose from engine options as well as the high-quality cabin options. Last but not least, there are some high-tech features too. 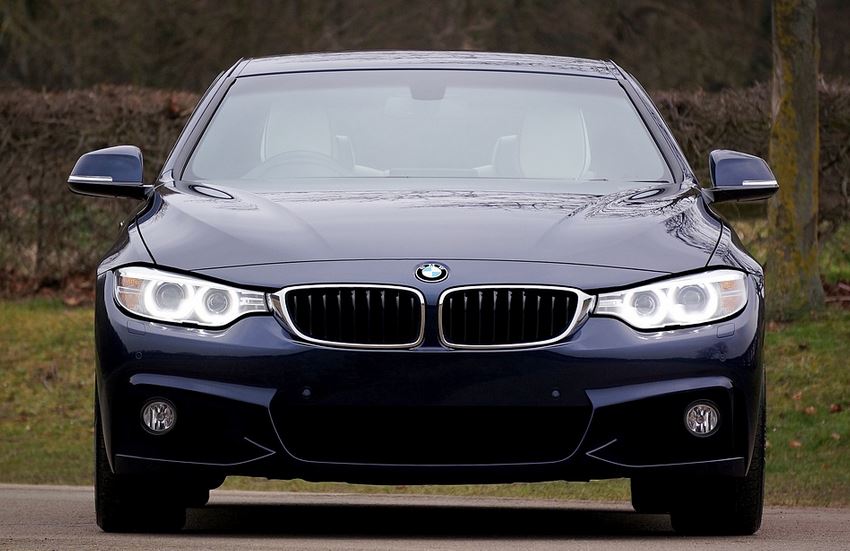 Having sold 59,449 units in 2017 itself, BMW 3-Series is surely a deserving vehicle on the list. As a matter of fact, however, the number is very low when compared to the last year’s sales of 70,548. Compared to other entry-level luxury vehicles in the market, BMW 3-Series offers a more spacious interior and a better system for infotainment. If you prefer responsive handling options and a bunch of powerful engines to choose from, you should go for BMW 3-Series. 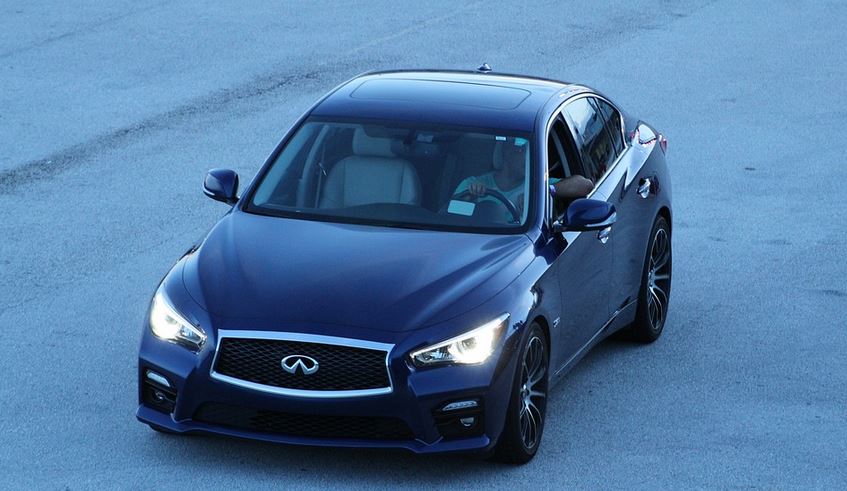 Despite the decline of 8.7%, the Infinity Q50 was able to sell out 40,739 units in total. If you expect several easy-to-use features such as better power and safety options, you should consider this small luxury car from Infinity. You can enhance the luxury and feel by adding options like the Bose audio system. That having said, there are some areas where Infinity Q50 may let you down. Some of them would be the lack of fuel efficiency and a rudimentary cabin design. 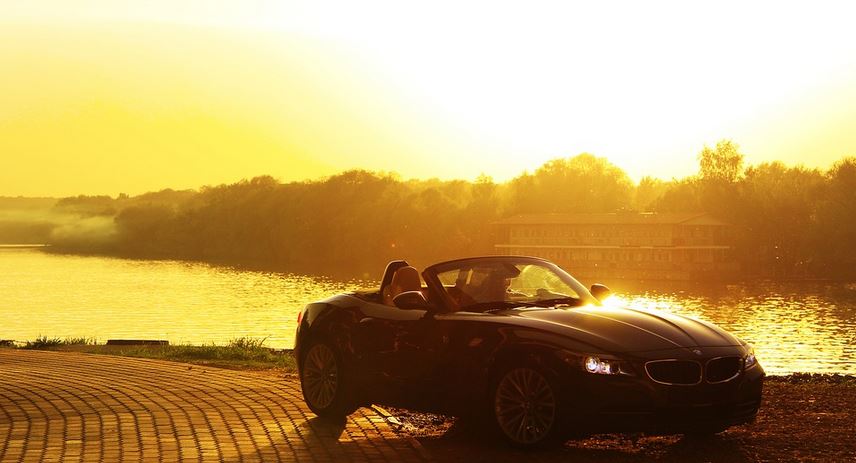 There is a reason why BMW 4-Series was able to sell 39,634 units, which gives the company an increment of 10.80% from last year. The BMW 4-Series is a wonderful entry-level luxury sedan that packs a bunch of cool options like powerful engines and dynamic handling. You can also count in the enhanced safety options and the extra spaciousness. When compared to the other vehicles in the class, however, BMW 4-Series may seem to be a bit pricier. 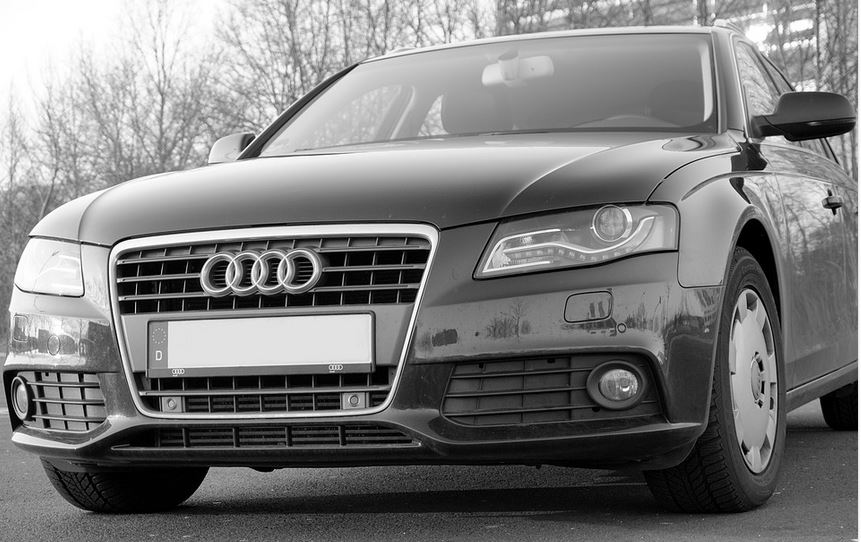 Audi A4 is another car that has increased the unit sales by a minimal amount in comparison with the numbers from last year. 37,674 units of Audi A4 were sold out last year, which is a great number for a car of this brand value. In this version, the company has focused on tech features and assisted driving. In addition to that, you can count in the posh-quality interior and more space on the sitting part. Also, it should be noted that Audi A4 ensures a combination of both comfort and performance. 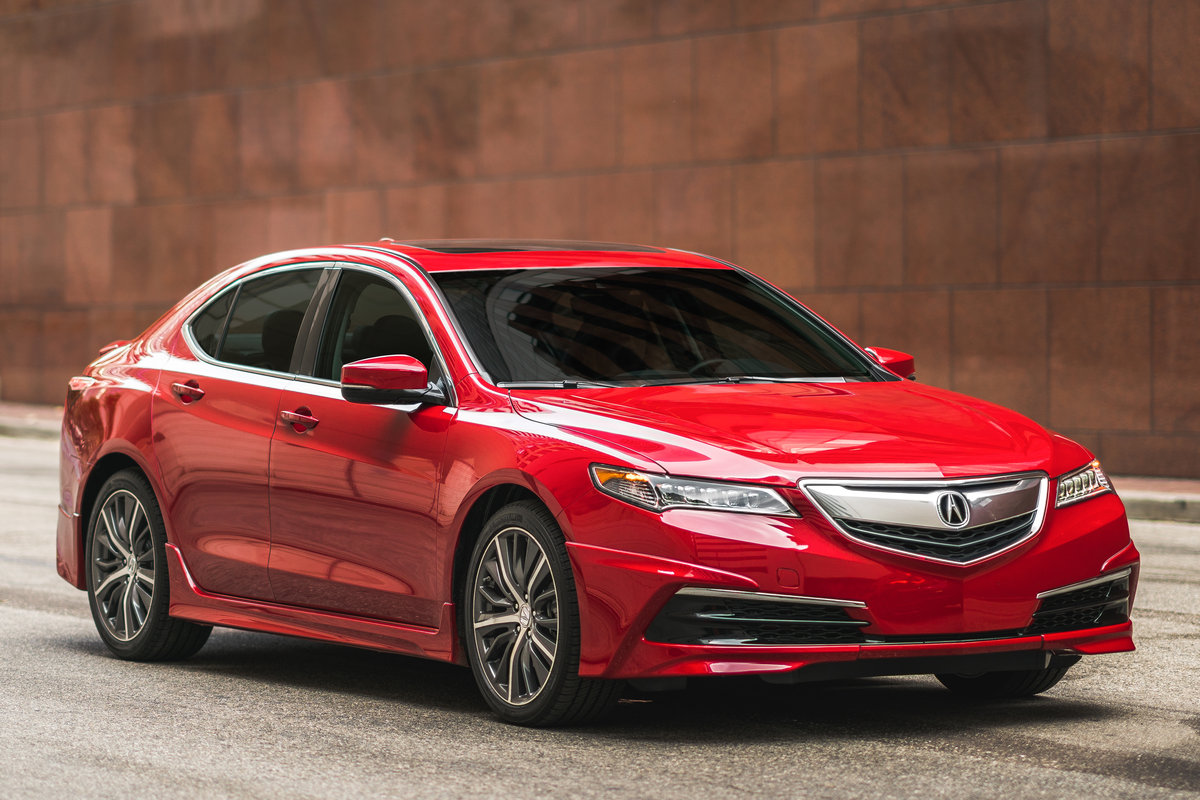 The 2016 model of Acura TLX was so impressive that it was able to sell 37,153 units in total, thus maintaining a top position in the best-selling list. However, the company didn’t make include an upgrade in the version for 2017, resulting in a decline of 6.20% and a sales figure of 34,846. Although there is an optional engine in addition to the base engine, the primary performance isn’t that impressive. Even though it has a luxurious as well as well-designed interior, the overall price of Acura TLX is affordable. 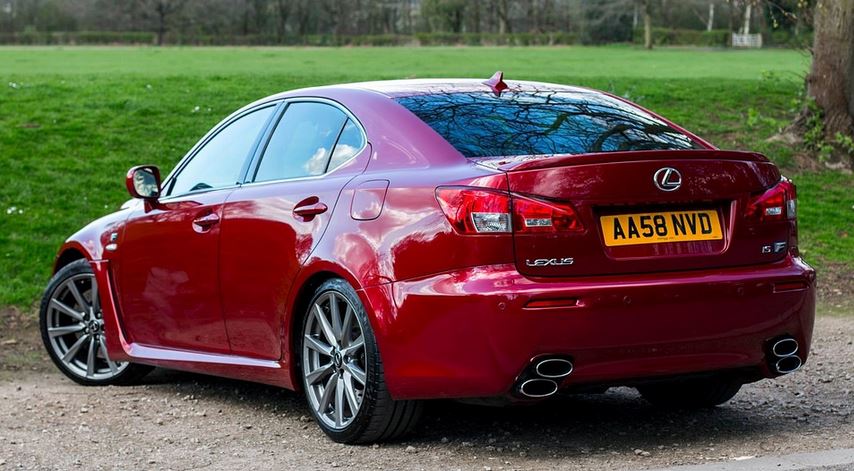 It seems that people who were looking for a smooth riding experience found Lexus IS as one of the attractive small luxury cars of 2017. 26,482 units of the vehicle was sold in the year, which was actually a decline from 2016’s 37,289. However, you can still count on Lexus IS if you are impressed by options like enhanced tools for driver assistance and power sufficiency. That having said, driving dynamics is not one of the strong areas of Lexus IS. You may also find better power in some German rivals. 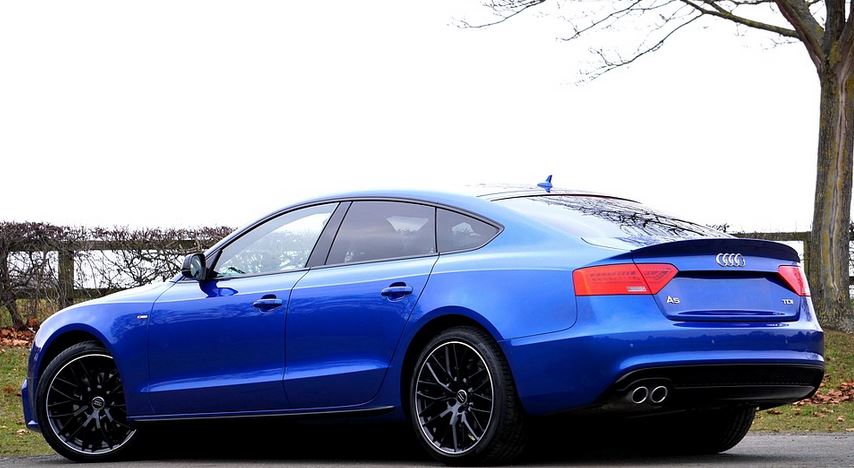 Audi A5 had an incredible growth of sales figures when compared to the last year. The growth it had from a figure like 8,354 to something big like 21,301 is no less than breath-taking. If we were to rank small luxury cars based on the increase of demand, Audi A5 would top the list. Although there was no addition of worth-pointing-out features, Audi A5 was able to make the mark on aspects like power and interior materials. It’s sometimes found that you may come across better alternatives according to a slight change of preference.

20,669 units of Mercedes-Benz CLA-Class were sold in 2017, and it’s a reason why it’s on the list. However, like most of the other vehicles in the list, Mercedes-Benz CLA-Class is also noted for the decline, which is, in this case, 19.90%. Front-wheel drive and better fuel efficiency would be two unique features of this premium vehicle, and a major reason why people recommend it. Also, as it comes with almost every product from the prestigious Benz, you can count on better handling and assistive features. 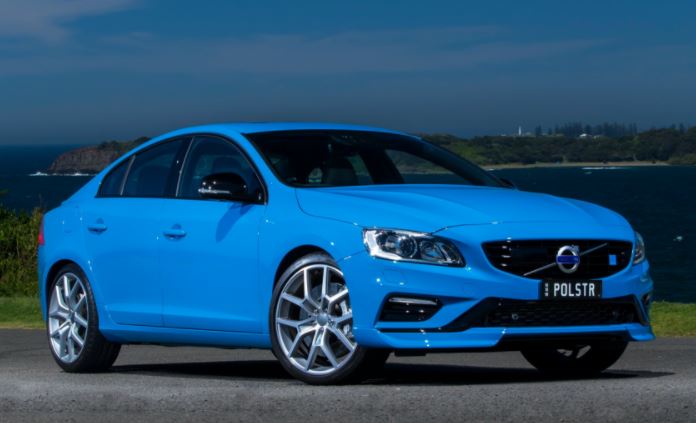 Volvo S60 was one of the favorite choices of people who were looking for a comfortable ride and premium-quality experience. It also needs to be noted that, unlike most of the high-end cars, Volvo S60 offers one-of-its-kind fuel efficiency. 16,825 units of the vehicle were sold in the last year, claiming the 10th position in the list. It’s going to offer a right-balanced drive, which gives you control and power, in addition to the tech and assistive features.

These were the entry-level luxury vehicles that made it to the best small luxury cars of 2017. As you can see from the descriptions, the cars are not only focusing on the posh lifestyle but also including advanced power and control. 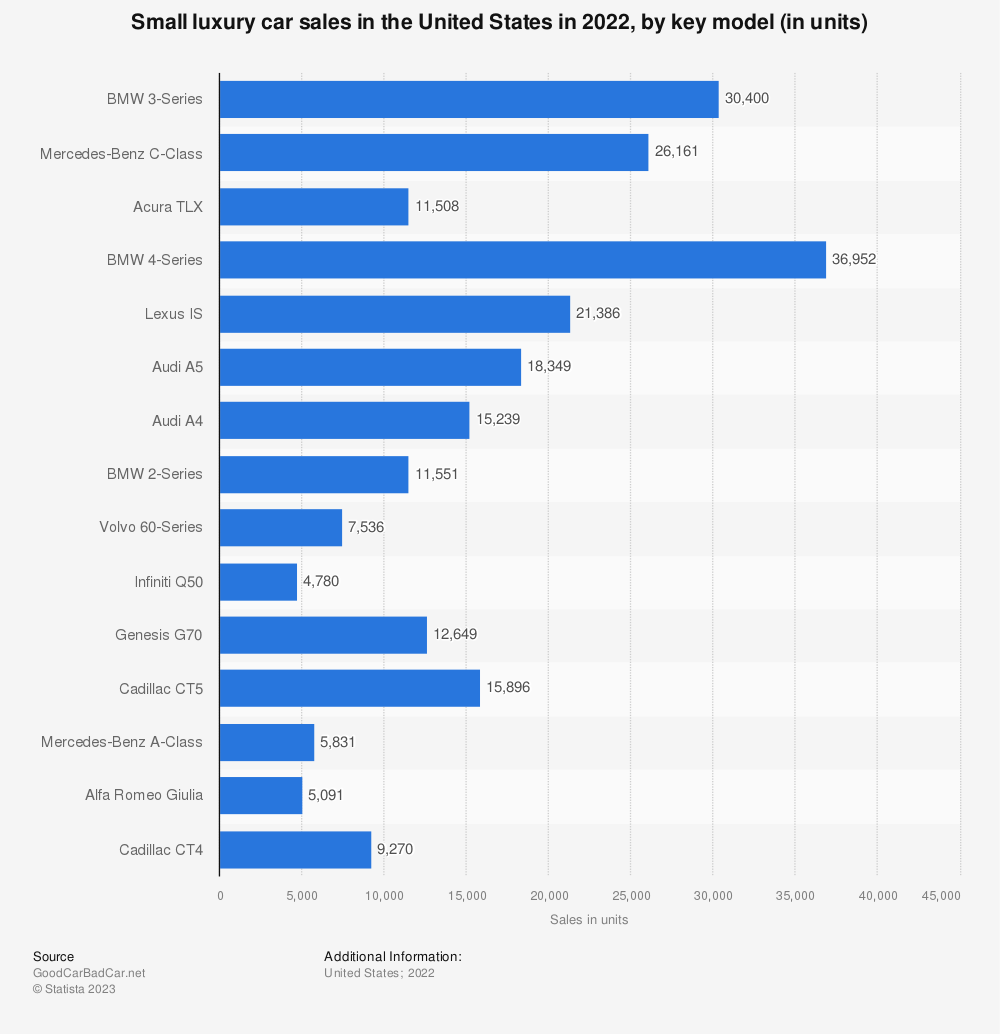 Also Read Car sales in the United States between January 2017 and 2018, by the manufacturer (in units)

This site uses Akismet to reduce spam. Learn how your comment data is processed.